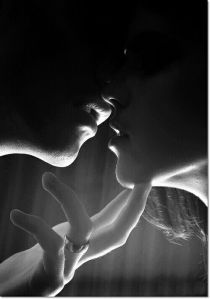 Abruptly, he thrust his cock through her parted lips. She fought for breath through his merciless plunging. He pulled back just long enough for her to fill her lungs and then resumed his attack. He leaned forward and began swatting her ass with each forward thrust, alternating cheeks, and intensity, leaving bright pink prints behind with each stroke.

He raised his hand and slapped her across the face as he withdrew from her slobbering mouth. His sting on her cheek was heavenly. She redirected the intensity of the blow to her core, causing her cunt to clench tightly. It was the clench that made his forceful entrance into her wet pussy that much more concentrated and amazing. He began pounding deep inside her, and the repeated contact of his hips against her stinging pink ass almost transported her to a place where she would come totally undone. She knew she had to wait. She knew she didn’t have permission. But, oh my, her body quaked with the denial.

He knew he was close to release. The feeling of her muscles clenching him tightly brought out the most guttural groans from his throat. He knew he would be needing release soon, but where? He withdrew and quickly returned to pounding her throat. He couldn’t deny that she was an expert in oral pleasures. If he had known she could deep throat like this, he would have taken her long ago, with or without permission. Rapidly, he moved back to her dripping cunt. The warmth, the tightness, and the sweet juices almost overwhelmed him. But, no, that is not what pleased him most. With that revelation, he returned to her mouth, grabbed her hair with one hand and wrenched her face upwards. With the other hand, he gripped his throbbing cock, pulled two aggressive strokes and released himself, coming across her face.

He extended his hand, helping her to rise and stand in front of him. He gently used his shirt to wipe her face clean. He clasped her jaw in his hands and tenderly kissed her inviting lips. Pulling back with a grin on his face, he simply said, “Good Girl. I will DEFINATELY have to remember that word.”

Thirty minutes later, Lawrason and Marie returned, laughing again about some seemingly new private joke. The final dishes for lunch were being placed on the perfectly set table. David arose from the barstool where he sat, drinking an iced tea, and greeted his wife with a chaste kiss. Kay came around the table to greet Lawrason with a loving and lingering embrace.

Lawrason pulled back with a smile on his face, and that mischievous twinkle in his eye and inquired, “Everything looks and smells amazing. Did we give you enough time to get EVERYTHING done?”

Kay swatted him with the dish towel that was again in her hand. “Plenty of time. I was able to make lunch and David and I had enough time left over to get to know each other a LOT better.”

Lawrason walked over to David and extended his hand in a firm handshake. “Well, my friend, I appreciate you taking care of my wife while I was gone. I am VERY happy to say, I was able to get to know your wife a LOT better too.”

The End
written by Miss Amelia
edited by Professor

An Englishman, walking the Warrior's Path towards Ultimate Truth.

Not your typical Dominant, I proudly defy labels. I my career lets me live, when I am living I ski, run, hike, read, write and embrace life. Single, 47, NSFW.