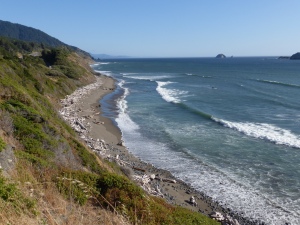 I was enjoying my drive down the coast along Highway 101. The sun was shining, the water was calm and colored a deep azure blue that blended effortlessly into the cloudless sky. I had been giddily anticipating this trip to whale watch for months. It gave me two days of peace, quiet and indulgence into one of my favorite pastimes. I had made several stops along my route that day, but the whales had managed to elude me.

On a small stretch of straight highway, I noticed a group of people pulled over on a minor turn-out, glassing with their binoculars out on the ocean. I decided to stop and hopefully see my first whales of the trip. I was able to squeeze my car in at the very end of the small gravel pad, stopping right against the railing as the road began a sharp curve away from the ocean. I was up on a cliff top, with an unobstructed view of the vast ocean below.

I immediately noticed the spouts, not too far out, amongst some protruding rock forms in the ocean. I anxiously lifted my binos to my eyes and began counting. One, two, three, four…Yes, at least four whales. They were spectacular. I watched as they rose and sank. I saw sprays from their breaths, their backs gracefully glide above the water’s surface, and the thrilling flare of tail flukes as they again dove into the depths. I was so completely mesmerized and enthralled by these great beauties that I hadn’t even noticed all the other watchers had returned to their cars and left.

I decided that I should take a quick scan of my surrounds, so I swiveled my head in all directions to survey. I glanced down the cliff’s edge, to the sandy beach below and noticed three people I hadn’t seen before. I did a quick glassing of them and noted one woman and two men gathering driftwood, which had been thrown by the ocean in great piles against the base of the cliff. They were placing short pieces of it in boxes, and I surmised that they must be camping nearby and needed the wood for their campfire tonight. Humm….maybe they would be making S’mores. I hadn’t had one in years, but DAMN how I loved them when I was a kid. With the lovely thought of gooey S’mores floating in my head, I again turn my focus to the ocean and the whales.

After an unknown amount of time had passed watching the whales, I decided to give my eyes a quick break from the pressure of the binoculars, and I again glanced down and to my left to the beach below. The woman and the tallest man were standing amongst the driftwood, kissing. I smiled to myself, wondering what kind of love story those two shared. Were they married, engaged, dating? The thought of love always brought a lightness to my heart and a smile to my face. But my daydream subsided as my eyes opened wide and I gasped at the sight I now watched down on the beach. The Second man had walked up behind the kissing woman, placed his hands on her waist, turned her away from the First man, and was now taking her mouth in a passionate kiss of his own.

WOW! Oh, Wow! I don’t know what is going on down there. What are they doing? That isn’t right. People don’t do that. I turned and again clumsily brought the binos up to my eyes and tried to find the whales that I had so longed to see. I couldn’t focus. I couldn’t find them. Where did they go? What are those people doing? I was breathing hard, flustered and I knew that what they were doing was wrong, yet, I slowly turned the binoculars to the side and again began watching the three on the beach.

An Englishman, walking the Warrior's Path towards Ultimate Truth.

Not your typical Dominant, I proudly defy labels. I my career lets me live, when I am living I ski, run, hike, read, write and embrace life. Single, 47, NSFW.